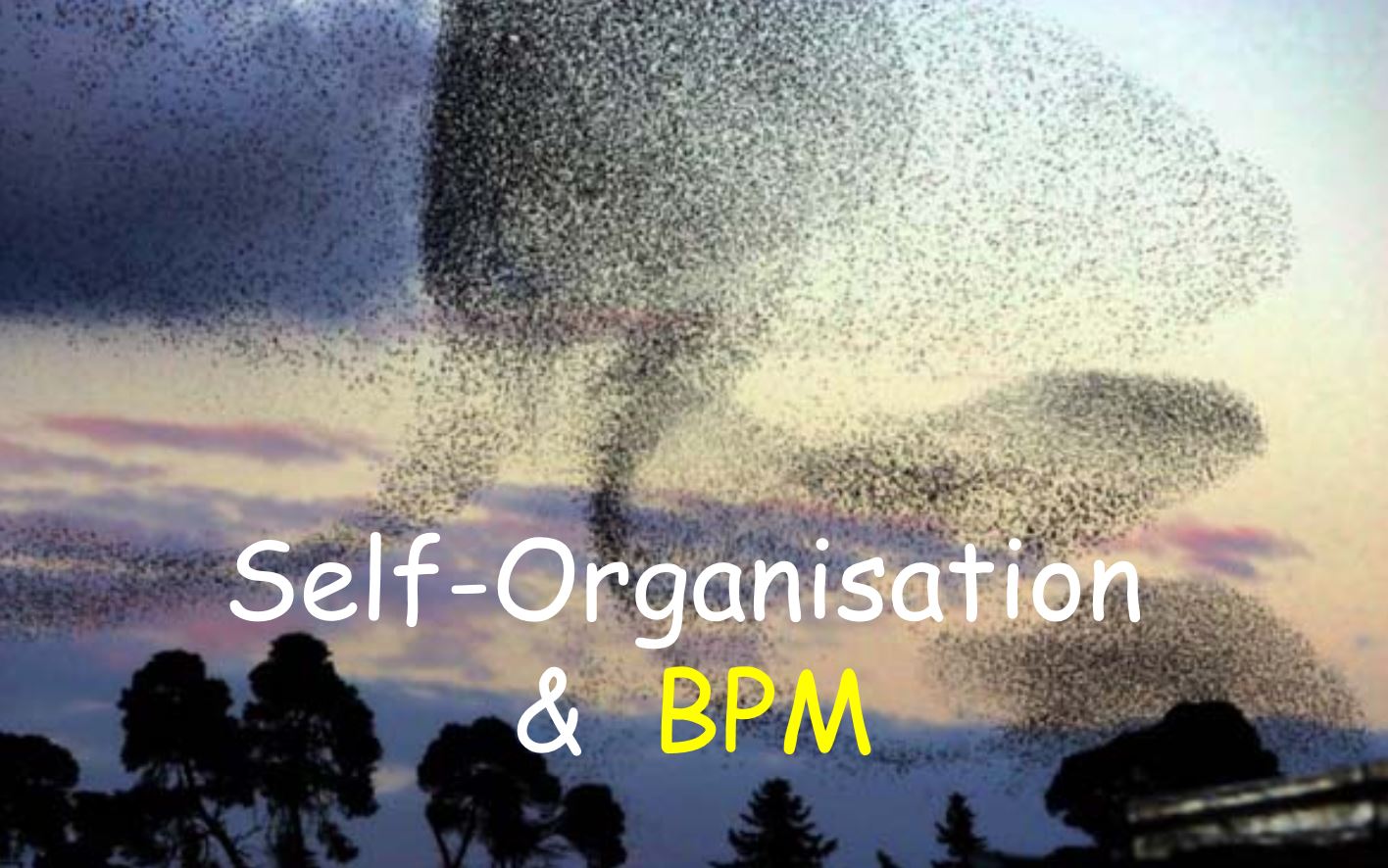 (Occupational) Burn-out‘s, boreout’s and mental breakdowns are quite hot topics these days. Now, you may think “what the … is the relationship between process-thinking or business process management versus these aforementioned subjects affecting humans?”.

Well, read this blog, and you will discover why self-managed teams and BPM are 2 sides of the same coin.

What are self-managed teams?

Let’s first have a look at the origin of self-managed teams.

How new are self-managed teams?

Though self-managed teams seem to become more and more current these days – among others thanks to Laloux’s book ‘Reinventing organisations’ – they are not that new.

According to Pierre van Amelsvoort and Guido Scholtes (1993) – both pioneers in sociotechnical systems -, whom work I studied for my Master in BPM, commencing this 21st century, their origin dates from the Durham coal mines (England). Indeed, due to uncertain and unsafe conditions in the underground (e.g. risk for explosions), more freedom was granted to these miners. This way, they could organise their work themselves, so to have more flexibility to be better able to cope with substantial risks.

A self-managed team is a group of workers (employees), which is responsible – and accountable – to deliver a well-specified product or service; or to achieve a clear objective.

Although there are probably more reasons why self-managed teams may be useful, let’s mention following main ones.

Do you recall why Durham miners were granted more freedom in how to organise their work in the underground?

To get more agility to better cope with uncertainty and risks, indeed.

And how would you best describe our nowadays world? By the VUCA acronym, which summarises our world as Volatile, Uncertain, Complex and Ambiguous.

How many people expected the Brexit? Or who thought one year ago that a French would become president, while he did not even belong to a political party at the time of the presidential elections (Emmanuel Macron founded “La Répulique en Marche” as a political party after he was elected ; before that, it was a ‘movement’).

Would businesses and (non) governmental organisations acting in such a VUCA world not be better off by granting their workers more freedom in how to organise the work, as long as the result of their work is OK? Like the miners were granted to cope with uncertainty and risk, as long as the coal got overground as expected?

And I have not even mentioned the highly increased customer expectations of being served 24/7 within the 24 hours, a growing standard initiated by webshops. Which increases the pressure on organisations to be even more agile as well.

When evolving from crafts to industry, productivity and economy soared like never before. Quite soon thereafter, less rich people could also afford an own car and much more material wealth. A good thing for people as a consumer; however, how happy did people become as workers?

In the blog “14 characteristics of the Process Organisation” I already mentioned the drawbacks of Taylorism and  Fordism, and even referred to Charlie Chaplin’s Modern Times.

While in this previous blog, I also stressed the importance of “mental flow” for your human capital; and how you may optimise your organisation’s productivity by fostering this flow. 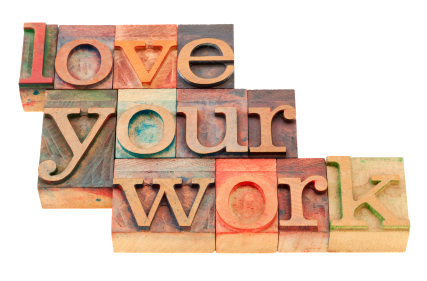 You get it: particularly for people who do not like to be micromanaged but rather want to take (some) responsibility, self-organisation is a relief and an important intrinsic motivator. And in a world where people are more and more highly educated, the importance of – read need for – co-responsibility and participation, self-determination and appreciation will only further increase. Managers who will fail treating workers, particularly knowledge workers, as a source of creativity, or who ignore peoples contributory insights will meet human resources problems.

But why is a very hierarchical organisation quite inefficient and anything but agile?

(non) Agility of the hierarchical organisation

Have a look at below organisational chart, reflecting a hierarchical pyramid. Imagine Peter, whose work contributes to an important end-to-end business process ; of which he works at the latest process step. This process crosses at least 2 organisational departments; represented by respectively the green and the yellow boxes at process level. Because Peter works at step 5, the most downstream side of the process – though the closest to customers -, he often undergoes poor quality of more upstream activities.

Moreover, Peter has 3 hierarchical Management Levels (ML1, ML2 and ML3) above him; even not including the CEO. For the good execution of his work, and because he knows the customers expectations quite well, Peter has an important remark or suggestion related to quality improvement. 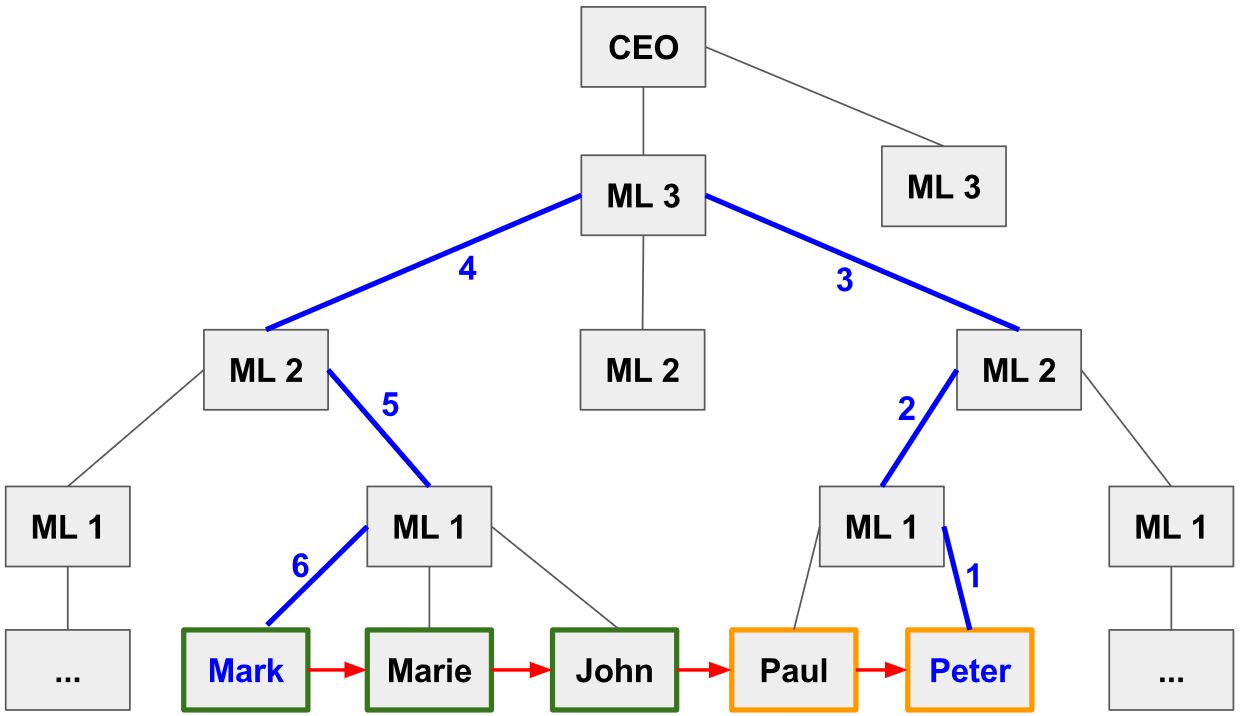 Given the fact that he must respect the hierarchical way of communication, how many steps do you count before Peter’s message has reached Mark, responsible for the execution of step 1 of the same business process? At least 6 steps, indeed. Even not counting the return communication (back from Mark to Peter).

What about the speed, efficiency and the effectiveness (noise or bias) of such a communication?

This illustrates what van Amelsvoort & Scholtes call “complexity to manage well-functioning interfaces” between the many organisational parts. More commonly, this is called “functional silo’s”.

Still of this time?

Though hierarchical organisations meant a big progress from an economical perspective, are they still appropriate to our current (VUCA) time? A time where time-to-market and strategy-to-execution time are constantly under pressure because product and service life cycles are continuously shortening due to severe competition and ever increasingly demanding customers.

Why self-managed teams with BPM?

Imagine now the same end-to-end process as described earlier. Though the entire process is now managed by one self-managed team, consisting of the same persons at the operational level. Would the process not be much more efficient and effective, though especially much more agile? If Peter gets a new requirement from customers (whether an internal or an external customer), he can talk to Mark right away. No more need for the communication to pass 6 steps between Peter and Mark, and still another 6 steps from Mark to Peter.

Too good to be through…?

Well, if your organisation already has an acceptable business process maturity level though still works (too) hierarchically, then a further evolution to self-managed teams is no rocket science. It’s rather the logical path to be followed.

then a major part of the work to evolve to self-managed teams is already in place. Mind that installing self-managed teams may also lead to – rather than being  the result of – the 6 abovementioned characteristics. Just like with yin and yang, no matter what is first, as they form a symbiosis.

Using BPM as an enabler for an organisation applying the self-managed teams principle is rather obvious. Basically, assigning business processes to self-managed teams boils down to considering each team as a mini-enterprise belonging to the larger organisation, which has a coordination role, ensuring that the higher flow – say the overall value chain – functions well.  Like depicted in below figure.

Having well-defined responsibilities on the process output, each team can organise and manage itself, as long as they deliver the outputs like agreed and specified. The team is now its own boss, delivering a clear output, and knowing how this output relates to the final output(s) of the organisation towards its clients.

And the basic principles for the successful application of self-managed teams are fully in line with BPM and its philosophy.

These 9 principles – according to van Amelsvoort & Scholtes – may be considered as “critical success factors” when looking at ‘installing’ self-managed teams. Though they also confirm why self-managed teams and BPM are 2 sides of the same coin.

The team task must be a whole, must have a clear scope and must have measurable results. Isn’t it what BPM aims at for a business process : a clear, well-defined and measurable output and objective?

The team must have enough control options and autonomy to be able to execute their tasks according to their responsibilities. The reverse thus of micromanagement: the team can decide how to run the process, as long as it fulfills the process objectives, including the output(s) they commit to.

This means that the team best masters a minimum level of BPM, given its responsibility for the best process organisation to achieve the output according to the expected specifications.

Mutual dependence of the team members fosters the working as a real team. Even though the team members have a common interest – among others the achievement of the process objective and the respective output(s) -, team members must have some latitude for their individual tasks.

The team size should be such that it delivers a recognisable contribution to the overall organisation ; while the team can take decisions quite quickly without being too vulnerable.

Empirically, teams from 4 to 20 persons are considered acceptable, though a size between 8 and 12 seems even more ideal for fast decisions.

Team members must be employable for various tasks, say less specialised than in strong hierarchical organisation. And internal status differences between team members, if existing, should never interfere with a flexible division of labor or with internal group mobility.

As well for the outside world as for the team itself, it is strongly recommended to have a single point of contact, streamlining communication between the team and other teams or even contacts outside the organisation.

The team must have its own space, its own operational resources and must be able to manage its own information.

Management systems, like for instance planning or quality management methods & systems must be in line with self-managed teams. These must offer enough space – say flexibility – so to enable the teams to let adapt them to their needs.

The reward must be such that it challenges members to contribute to the group process and that it strengthens group cohesion.

You will read more about self-managed teams in future blogs. Among others the steps – say a roadmap – you could / should apply for a transition from a hierarchical organisation towards self-managed teams. And some practical cases of organisations having experienced this evolution as well.